Thanks to her multidisciplinary medical team at Saint Barnabas Medical Center, 36-year-old Carol Patel is free of breast cancer and looking forward to the future with her husband, also a young cancer survivor.

When your spouse gets diagnosed with cancer at a young age, you don’t mess around with your health—you see something, you say something. So in March of 2015, nine months after her husband Jeff Patel underwent an orchiectomy for testicular cancer, Carol Patel made an appointment with her primary care physician the day after she found a suspicious lump on her right breast. “I didn’t have any symptoms—I was just hanging out, stretched my arms up and I brushed my right side and felt something,” she says. She had a breast cancer diagnosis by the end of that week. Her tumor had larger margins than a stage 1 one would, but it was still stage 2 since it luckily hadn’t spread.

At the time, Carol, now 36, was seeing a physician elsewhere with whom she “wasn’t thrilled”: This doctor recommended a lumpectomy, but Patel, who’s adopted, knew she wanted to undergo genetic testing and a double mastectomy. Ultimately, the Hackettstown native (who then lived in Montclair) explored other options and instantly clicked with M. Michele Blackwood, M.D., chief of breast surgery, Rutgers Cancer Institute of New Jersey and medical director, Northern Regional Director of Breast Services for RWJBarnabas Health. In September of 2015, Dr. Blackwood performed Carol’s double mastectomy after she underwent two rounds of chemotherapy—including AC-T, or AC-Taxol regimen—that summer with Jennifer Wagmiller, M.D., medical oncologist at SBMC.

“If we give the chemo right away, it gets rid of the cancer cells in the breast and those floating around her blood stream,” says Dr. Blackwood. “This way, we’re not allowing that cancer to spread to other organs while healing from surgery and waiting for chemo.”

Carol, who later received implants in both breasts from SBMC plastic surgeon Cyrus Loghmanee, M.D., went on disability from her job in digital marketing while undergoing treatment.

In addition to fantastic medical care throughout her cancer journey at SBMC, Carol also got answers about why she was diagnosed with breast cancer at age 29: Genetic testing revealed she inherited a mutation in the PALB2 gene, which Dr. Blackwood says is “truly a risk factor” for early onset breast cancer. “I felt better knowing there was a reason,” she says. “I was the youngest one in the chemo room by far.”

But Carol was already in what she calls “fight or flight mode,” in part because her husband was a cancer survivor and her adopted mother had died from colon cancer about four years before Jeff’s diagnosis. “I was ready for the worst—I was relieved that it was localized and there was a plan, but I wasn’t totally shocked,” she says.

Luckily, that treatment plan worked and her prognosis is excellent, thanks to the multidisciplinary team at Saint Barnabas Medical Center. “The whole team was so reassuring—[they’d say] we got this, we’re used to seeing this and we feel really good about treating it,” says Carol. “Everyone was confident and friendly—I never felt transactional.”

Adds Dr. Blackwood, “Our goal is to get patients not only to be cancer-free and look beautiful, but get them to where they can live a normal, healthy life.”

Carol is currently doing all that and more. She continues to get breast exams, sees her oncologist every six months and takes a daily dose of Letrozole, an oral drug that shuts down estrogen production.

For a long time, Carol and Jeff were scared to plan for the future. “I was very afraid to think more than a year out,” she says. “It felt way too optimistic to assume I would see [age] 60 or 65.” But in 2020, once she hit her five-year mark of being cancer-free, the couple felt ready to buy a house and get a dog. “We’re saving money for goals that we have and thinking about what we want to do in retirement,” she says. “As boring as all that financial stuff sounds, we were not willing to face it for a while. I feel much more confident now.”

She concludes, “There’s nothing that could happen in our marriage that will stress us out more [than both having cancer]. We’ll be stronger because of going through it together. We know we’ll be OK.”

To learn more about The Center for Breast Health and Disease Management at the Barnabas Health Ambulatory Care Center, call 973.322.7020. 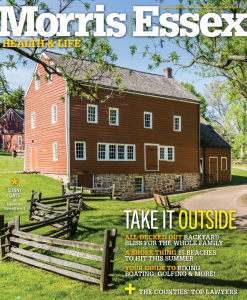