Why does cryotherapy have fitness fanatics lining up to endure icy cold temps in their underwear?

If you care about what’s cool, you need to know about a growing fitness trend that gives new meaning to the phrase “post-workout cooldown.” It’s called wholebody cryotherapy (WBC), and it’s used before or after a workout. It has caught on with such celebs as Jennifer Aniston, Mark Wahlberg, LeBron James, Mandy Moore, Hugh Jackman and Cristiano Ronaldo, some of whom say it’s helped them look and feel better than ever. But WBC isn’t just for extreme athletes or pampered VIPs. Cool new cryo-tech offers benefits for everyone.

Not to be confused with cryonics, the post-mortem freezing technique Walt Disney was falsely rumored to have used, WBC is used for rejuvenation. Cryotherapy is a modern, high-tech version of an ice bath, a treatment that has long been employed by athletes to help heal muscle tissue, reduce inflammation and modulate pain. “It’s a full body chamber that’s hooked up to a nitrogen tank,” says Billy Atkinson, owner of Let Loose NJ, a wellness center with locations in Closter and Montvale.

“You get in the chamber with gloves, socks and slippers and your underwear, and it blows cold dry air on you for three minutes.” So yeah, you’ll have to check your modesty at the door, but not the door of just a locker room. You can do WBC in posh spas, upscale fitness centers and physical therapists’ office suites.

Cryo converts have found that the process helps them tighten up without breaking a sweat. WBC has been reported to boost metabolism (a session can burn between 500 and 800 calories) and your immune system. “It forces blood flow to your extremities, and when your body is in that pre-hypothermic state, it boosts your metabolism and recovery by 300 percent,“ Atkinson notes. The process is also said to kick collagen production into a higher gear for tighter, younger-looking skin, improve skin blemishes and scars, reduce the appearance of cellulite, improve circulation and decrease anxiety and depression by upping serotonin levels.

There are two different types of WBC. The first is electric cryotherapy, for which one walks into what looks like a refrigerated sauna. If you were ever curious about how Rocky felt training in that butcher’s locker (without the cow carcasses), this method is for you. Inside, temperatures are reduced to between –165 and –185 degrees Fahrenheit, and oxygenated cold air is pumped in to uniformly cool your whole body. If you want to chill with a buddy, many electric walk-in chambers are big enough for multiple users at once.

For a more intense and personal experience, the liquid nitrogen vapor WBC chambers like the one at Let Loose NJ treat one person at a time, exposing users to temps of about –240 degrees Fahrenheit (but the temperature can be adjusted for first-timers). Liquid nitrogen chambers look like props out of a sci-fi movie. Think of it as a cross between an upright tanning bed and a human-sized soda can with a hole at the top for your head to pop through. Just be sure you’re completely dry before WBC, because any moisture on the body can freeze to the skin and cause frostbite.

Almost anyone can benefit from cryo, from collegiate-level athletes to seniors with aches and pains, but before trying cryotherapy, consult your physician. Sessions for either the electric walk-in or liquid nitrogen chamber WBC last between two and three minutes. To reap the touted benefits of this cool fitness tech, cryo should be done once or twice per week. And don’t be nervous about trying it. “Getting in a cold shower or bath is 10 times worse,” says Atkinson. “That’s wet, and this is a dry cold.” 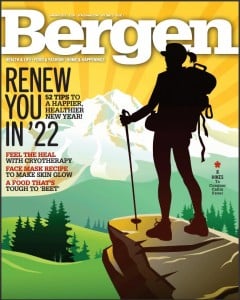