In Saddle River, thanks to a masterful transformation, a couple now starts each day in serene and tasteful comfort.

When two Saddle River empty-nesters decided to redo their dated, 370-square-foot master bathroom, they knew just whom to call. Diane Durocher of the eponymous firm in Ramsey had already designed their kitchen, their other bathrooms and a few rooms in their previous residence, so she was a no-brainer for the gig. Their ask? To create a modern and functional master en-suite that felt luxurious and glamorous—and that had its very own coffee bar.

The homeowners fell in love with the Michael Aram Orchid Collection Carrara marble mosaic from Artistic Tile in Paramus, and they knew it needed to be incorporated into the space. This tile became a feature wall above a new BainUltra soaking tub, and also inspired the overall palette. But instead of all-white-everything to match, the couple opted for warmer cabinetry. “The washed walnut stain cabinets make a big difference and add interest,” says Durocher. Matching antique mirrors and oval mullions open up the room, and the champagne-colored walls finished by Studio Eighteen look like wallpaper, but are in fact a “faux paint with flecks of German glass glitter to add a little bit of sparkle.” The glitzy branches on the chandelier by Corbett Lighting repeat the dogwood floral motif from the feature wall. 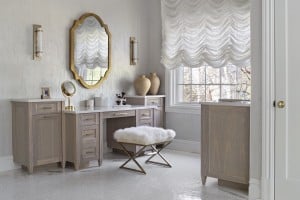 In the corner of the bathroom where the tub used to be, there’s now a multi-drawer makeup vanity and a built-in coffee bar. 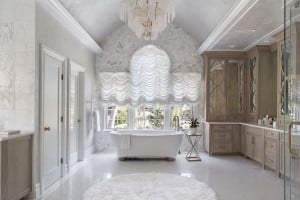 The beautiful dogwood Carrara marble tile from the Michael Aram Orchid Collection was perfect for a feature wall, and this organic element is repeated throughout the design, including above the coffee bar. The barrel-vaulted ceiling made of Venetian plaster, a towel warmer and the radiant heated floors create a spa-like experience.

Durocher says the existing ceiling was “distracting,” so the team opened it up and created a barrel vault ceiling to brighten and unify the area. The steam shower stayed put but was enlarged, improved and beautified with the installation of a transom window and Calacatta Gold marble. Its brass hardware by Brizo matches the brass detailing in the lighting, the cabinet pulls and the mirrors. “Brass is back, but in a different way,” says Durocher. “It’s not shiny—it’s more of a brushed brass, which makes it warmer and more transitional.”

The clients also requested a plethora of counter and vanity space. The bathroom boasts large his-and-hers vanities with Calacatta gold quartz countertops, hidden hampers and toothbrush charging stations tucked in the drawers. In the corner where the bathtub once stood sits a makeup counter and a coffee bar, the latter of which has a sink, a built-in fridge and a garbage bin for convenience. “They requested this coffee bar, and it was a fabulous idea,” Durocher says. “Just pour a cup of coffee and put on the shower!”

Even though Durocher has done a lot of work for this particular client, this project happens to be the standout. “She told me that this bathroom is her favorite room in the house,” Durocher confides. “I think that says it all.”