As the coronavirus keeps folks at home and limits contact with friends, more Bergenites seek out companions of the maskless, four-legged kind.

Choosing a pet has always been a ticklish proposition—guessing in advance how a needy creature will fit into your family’s routine and just what treasured items it may decide to chew on while it captures your heart. But since the pandemic began, there’s been a newly important facet of this animal adventure: competition. Pets up for adoption are in high demand.

“One of our dogs produced over 50 applications within three hours,” says Laura Witzal, founder and president of Pawsitively Furever in Hackensack. “There is a huge outcry for dogs and puppies.”

National media report that pet adoptions have soared as the pandemic has raged on, and our county seems to be no exception. Happy Tails Animal Rescue in Paramus is averaging 15–20 adoptions a month compared with its usual 10, and Closter Animal Welfare Society (C.L.A.W.S.) has doubled its adoptions since before the coronavirus, to about 15 per month. The Oakland shelter Ramapo-Bergen Animal Refuge Inc. (RBARI) has seen a more modest increase, but still an increase—it annually does about 600 adoptions, but saw close to 700 in this plague year.

Chalk it up to a craving for companionship in this lonely, stay-at-home era—and maybe a simple desire to smile and feel good. “People find companionship, joy and hope in adopting,” says Megan Brinster, executive director of RBARI. “We have all felt a little helpless this year, and getting the chance to give back and make a difference in the life of an animal brings purpose to people.”

More time at home, of course, means more time to get an animal trained and acclimated to its new living situation, so that some families who may long have considered pet ownership now find it more practical. Young couples and families are often on the hunt for new feline and canine companions in any era; in this one, professionals temporarily freed from the hassle of a daily commute and college kids home from school are seeking out adoptions too.

“Most people are looking for small-to-medium younger, hypoallergenic dogs that are good with families and also good for apartment living,” says Noreen Delaney, president of Happy Tails. But she’s quick to explain that no one type of animal accounts for all of the recent increase in demand; she has also seen a handful of hamster and guinea pig adoptions by New York City families who are looking to enhance their kids’ virtual schooling.

These days, the effort to acquire a pet can feel like the struggle to get one’s child into an exclusive preschool. “We had been looking into adopting for a while since my daughter needed an emotional support pet, and the quarantine provided the perfect opportunity,” says Alexa Soto of Paramus. But “the most difficult thing was the competition,” she adds—the family’s application kept getting denied because their yard wasn’t fenced in. Eventually they connected with Delaney from Happy Tails, who was fostering Mia, a 5-year-old Westie mix who’d been found wandering the streets of Passaic, apparently abandoned by her previous owners. “She fits into our family perfectly,” Soto says. “She is a mush who loves to cuddle and hangs out with my daughter all day during virtual learning.”

Older dogs and cats are generally the most difficult for animal shelters to place, but many local facilities have seen a higher-than-average number of senior dog adoptions during COVID. “Some older people who live alone have reached out for companionship,” says Sophia Sembos, founder and director of Cat Crew Rescue in Oradell. “We are always happy to match a senior person with a pet to help their quality of life and mental health.” RBARI, meanwhile, runs a “senior-to-senior” program, which has been flourishing over the last year. “I think people saw that senior humans were having a hard time this year, and that translated to people giving senior animals some extra love and care,” Brinster says. 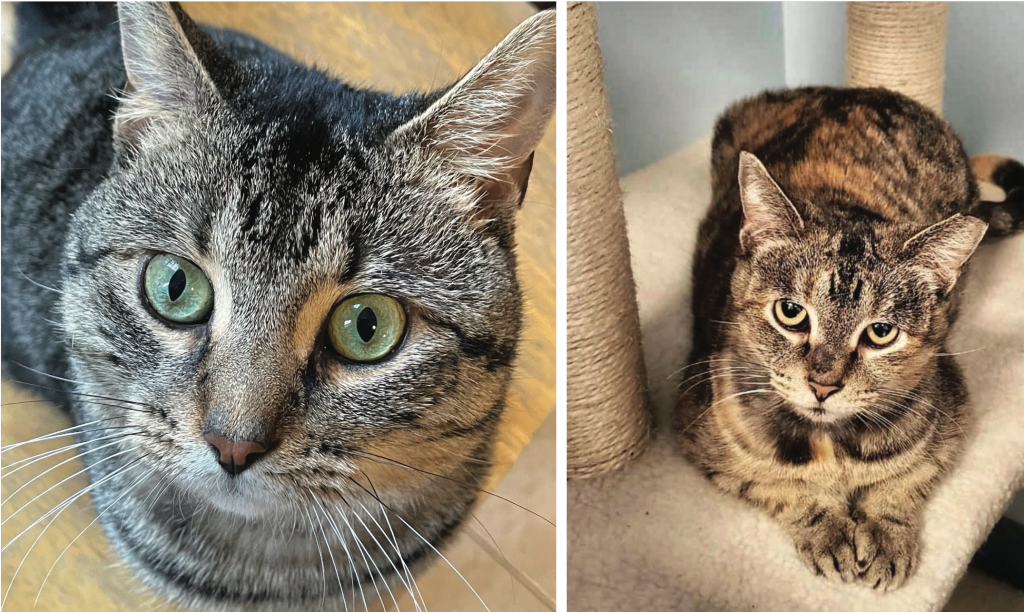 Top left, the new owner of Gio, this domestic shorthair, only met him via Zoom before adopting him, and his initial drop-off was very socially distant; “When I picked him up, I called and someone put his carrier on a bench outside the door!” Top right; Mallory of RBARI would do best being adopted into a home with at least one other cat.

One example is Joan Westervelt, a 72-year-old Closter resident who adopted 11-year-old Rocky, a Jack Russell terrier mix, from C.L.A.W.S.; her friend’s neighbor was fostering him after his owner moved into assisted living. Westervelt had lost her black lab, Shadow, in August to cancer and, though she typically favored larger breeds, knew the “energetic and spunky” Rocky was the perfect dog who came at the perfect time, after she’d fully mourned Shadow. “It has been very wonderful to have some good, loving company when I’m in the house alone,” Westervelt says of her new companion, whom she officially adopted in November. “Rocky and I are bonding more each day, and it’s wonderful. I am so blessed.”

Other Bergen County residents have been “replacing” lost pets; Sembos says she has had many such clients who felt that the pandemic was the perfect time to have a new four-legged friend join the family. Mary Beth Kuderna of Clarkstown in Rockland County, N.Y., adopted a new dog after hers passed away in December 2019. She donated some of her dog’s belongings to RBARI in January of 2020, at which point she met Mickey, an 8-year-old Miniature Pinscher. The timing wasn’t quite right to bring him home, Kuderna says, but once COVID happened and she found herself working from home, she kept thinking about him. “I’ve never not had a dog, but that emptiness was more apparent after working at home for a month,” she says. “I felt like Mickey and I were meant to be together at that point. He’s such a great little guy!”

Tiffany and Earle Connelly of Hasbrouck Heights lost the older of their two dogs two years ago; they also decided the pandemic was the ideal time to adopt a new one—except that when they met a Jack Russell mix and a chihuahua mix at C.L.A.W.S., they ended up adopting two. “We looked at their pictures and fell in love when we met them,” Tiffany says. “We were only supposed to adopt one, but did not have the heart to come home without the other one!” Geezer (the Jack Russell) and Dio (the chihuahua), named after members of the rock band Black Sabbath, are settling in quite well to their new home (and became fast friends with the family’s Schnauzer mix, Munchkin).

The boom in pet adoptions doesn’t mean COVID hasn’t brought its challenges, in pet adoption as in everything else. For instance, many adoption events have either been cancelled entirely or made less frequent because of social distancing requirements or because pet stores—despite the demand surge—have closed their doors. Chance at Life Cat Rescue in River Edge, for instance, used to hold cat and kitten adoption events almost every weekend at PetValu in Dumont, but that location shuttered all adoption events back in March 2020 and the chain itself recently closed throughout the U.S. Now, says Vanessa Staiger, the rescue organization’s president, it sends potential adopters photos and videos of the cats they’re interested in, and arranges FaceTime calls as well as socially distanced in-person meetings at the foster family’s home once a potential adopter’s application is approved.

RBARI has had to shift its business model as well, says Brinster, using social media, its website and e-newsletters to showcase the animals that are looking for forever homes. All applications are now completed online, families are vetted virtually and dog and cat meetups are by appointment only. Cat Crew Rescue, meanwhile, now holds all home visits virtually, and at counter to the trend. “We have seen many pets surrendered because people are losing their jobs, houses and sense of security,” says Delaney. “As people need to downsize, unfortunately their pets are given up because there is such a low percentage of rental housing that allows pets and they have no choice.” RBARI is seeing a trend of animals ending up in overcrowded facilities, being surrendered at higher rates and requiring urgent medical care, says Brinster.

However, the folks running these rescues and shelters are optimistic that even when we all return to normal—and return to the office—the good will outweigh the bad and pet lovers will still want to adopt. “Perhaps once the vaccine becomes readily available, more places will reopen and we will be able to do adoption events again,” says Staiger of Chance at Life. “It has been hard for all rescues and shelters, but we are optimistic that things will get better over the next several months.” And honestly, aren’t we all?

FOR THE CAUSE OF PAWS

Most nonprofit groups, including animal shelters and rescues, are struggling right now. Contact one of these facilities if you’re on the hunt for a new four-legged friend—or if you simply want to help with a donation in a challenging period: