A landscape designer, an architect and a savvy client turn a small Ramsey yard into a great place to swim—or just hang out.

It all started with Instagram. Homeowner Kristen Takla and her husband decided in 2019 that they wanted to build a pool in the backyard of their Ramsey home, and she fell in love with a photo a friend had shown her of a pool with fiber-optic starlights at the floor. After searching its hashtag on Instagram, she discovered Thomas Flint Landscape Design, immediately loved that firm’s work and was thrilled to learn that it was located just a few miles away in Waldwick. “Tom smiled and lit up as much as I did when we discussed this project,” Takla says of their first in-person, pre-COVID encounter. “He said, ‘Kristen, this is a game changer.’”

That it was. After much online research, Takla, who works as a professional home stager, knew they wanted a “curvy” pool to complement their linear and, frankly, limited backyard space. But they also sought a soft, spacious surrounding area that would be good for entertaining and would give them longevity—a space with great flow that would “grow” with them and their 9-year-old son.

So Thomas Flint, in conjunction with designers A. Kosits and J. Orellano, designed a layout with separate functional zones that would, of course, also look great and flow nicely. “They requested a pool area, shed storage, dining, a firepit and a lawn for their son’s trampoline,” Flint says. “We took their wish list and broke it down.” 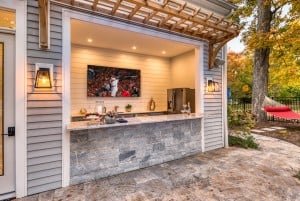 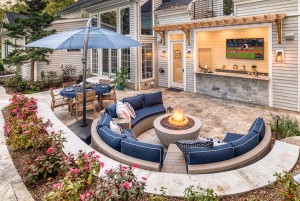 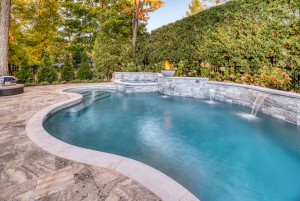 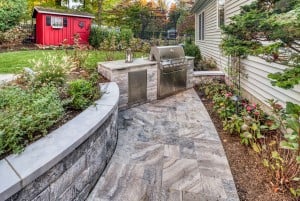 Takla had an existing curved wicker couch with navy cushions from Frontgate that she wanted to incorporate into the overall design. “The couch was my inspiration, and I loved that it seats two, two and two [people] for easy conversation,” she says. Takla and Flint agreed to put a natural gas firepit in the middle of it. They also transformed a storage space attached to the house and across from the couch into a cabana room, complete with a bar, a glass entry door and a mounted TV, at which the family gathers to watch games during football season.

In between the adjacent dining area and the grill are steps that lead up to the pool patio. The hardscaping throughout is “suitable for all needs,” says the homeowner. It’s made of brown and gray marble, a stone chosen because it is soft but not slippery and doesn’t get too hot on the feet in the summer. Up top, there’s a second curved sofa where the parents can hang out and watch the kids swim, a Jacuzzi to unwind in and fire bowls that turn on and off with a smartphone. The pool was deliberately made the yard’s focal point. Spillways from the back wall add visual interest and a faint backdrop waterfall sound to set the mood. “It’s not loud, but it drowns out some of the sounds of the neighbors or passing cars,” says Flint. “When not in use, the pool doubles as eye candy, because the sound of the water and the reflections create a nice ambience.” And let’s not forget the beautiful starlights that illuminate it at night.

To the right of the pool is a shed for storage and a small, tucked away plot of lawn, which Flint calls “visual relief.” There the boy and his friends play and bounce on the trampoline, which can easily be removed when he outgrows it.

The project overall took a little bit longer than anticipated due to the pandemic—Flint and others in the contracting business had to shut down operations for a few weeks last spring. But the team turned it around quickly, and the family of three was able to enjoy the finished project last summer, just when they needed that refuge the most.

“It is literally our favorite place to be,” says Takla. “We just walk outside and it’s so comfortable and inspiring. Instead of curling up with a good book, we go outside and hang out together.”.